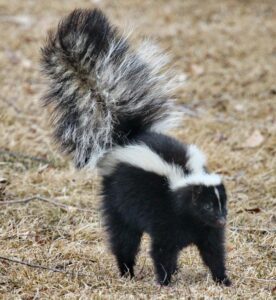 Picture this, One day you are out driving along on a route or highway away from the hustle and bustle of the city, on a weekend gateway to escape the 9-5 drag we call work its a beautiful day outside, skys blue no clouds a little wind. Something happens and you are faced with the choice of can you eat skunk? The answer is yes and no

Now you break out of your daydream and all of a sudden out of no where does none other than Peppy Le Pew stepping onto the road, trying to cross!!!!!

Now you have 2 choice, either 1 could be deadly or you could make it back to the house later that day.

Lets see what ends up happening? What would you pick?

You slam on your breaks, hoping to not hit precious, so cute black and white looking animal cat thing we call skunks.

This could make you get rear ended by the car that has been ridding your bumper since you left town and acting more and more like the truck driver from Griswold Christmas movie.

If you do choose this path, you abruptly come to a screeching halt and im sorry to tell you but you didn’t stop in time and hit lil old skunk and its sitting smack dab in the middle laying there.

You know have a choice to make, you could either say sorry little fella and put him on side of road to get rid of the evidence.

Or you could say hmm ive had many things in my life like gator and squirrel but never skunk.

Let me think do I want to taste this and see what its like to knock it off my bucket list like the water boy did with possum?

Is another avenue out, where along that road you see Peppy and you swerve. Banking onto the shoulder not hitting him and jumping back onto the road. No craziness and back on your merry way and it becomes an after thought.

Most people due to slow reaction times and distractions like cell phones and all the dang dials in a car, will most likely do CHOICE 1 and not be able to do choice 2.

So knowing this we are stuck with choice 1 and the dilemma of  having to figure out what to do with the skunk.

Today we are learning about skunks and can you eat skunk, yes or no and if so how and why is it possible.

What is a skunk?

A skunk is a small furry cat like animal(think fluffy and cuddle except not) that is usually black with white strips. Although there are species that are spotted and some that have swirls in their fur not like the Loony Toons we have all come to know and love.Skunks live anywhere and everywhere from your local trashcan to the great outdoors.

As we all seen them they are the size of a house cat so between 8-19 inches long and weigh anywhere between 7 ounces to 14 pounds so in the range of most house cats according to live science.

They may look cute but skunks have the white stripe to let predators big and small IE big like us and small like other creatures there size that they have something nobody wants to encounter. Lets find out what that is that makes the skunk a formidable foe.

So what makes a skunk so inedible?

What makes the skunk so inedible is the glad that produces a bad gas that can clear the Savannah and odor that can last for a while.

This spray alone can last up to a couple of days and can linger for longer, prove me wrong or comment if its happened to you like it has me…This is the main thing we are looking to avoid if we ever want to be able to eat the skunk we hit on the road.

If by any means by accident, ie run over the skunk you could pop the gland and it burst which the permeates to the meat and becomes inedible.

Another way that it can be inedible is if you were hunting it and shoot it, the bullet remnants can be all over meat which would take more time to pick out then actually eat, thus making it not easy to eat or worth the effort.

** Also something to consider when trying to eat skunk, is they can be carriers for Rabies, which if not treated if you get it can be deadly** Proceed with caution with this animal**

Lets dig into how to actually start this process now given that we have either safely removed the gland or don’t have buckshot all thru the skunk so we can try and actually eat it.

Does anyone actually eat skunk?

Yes, after doing much research historically native Americans have been able to successfully catch, skin and remove the bad part of skunks for eon that has made them possible to eat with little to no issue.

Tribes such as the Southern Okanagan, Chippewa, Mistissini and Attawapiskat Cree and Sioux.The animal was also reported to have been eaten by the Kalispel, Iroquois of Onondaga, Red Earth and Plains Cree and presumably the Algonquian. The Micmac (Mi’kmaq) of Richibucto hunted striped skunk for its fur, and did not consume its flesh found research here.

Although in Native American Indian culture it was believed that skunk meat was poisonous.

Fun fact as well Native Americans believed it was bad luck to cross paths with these animals as it was seen as evil sorcery.

How do you prepare skunk possibly?

Knowing what you do now from the history lesson and background on Mr skunk. We know that we must first neutralize and get rid of and not pop said stink sack and gland before we can enjoy said meat.

Step 1: Take Peppy the roadkill, off road and wrap in something till you get to a place to start the process of preparing the skunk meat.

Step 2: Once in an area to clean the skunk, clean Peppy with soap and water maybe some dawn action to make sure there isn’t anything hanging around.

Step 3:Pat and dry down skunk and make sure all animal is dry. This will help with the skinning process.

**Pay careful attention to its hind quarters so there isn’t much at all smell if any.**

Take a knife or sharp object and cut out the gland and then use your fingers to gently pry and loosen the connective tissue surrounding it.

Gently and hopefully intact and with a quickness take out the bad bacteria filled cavity to start working at the meat.

Step 5: If you get the sack and major fat cells from all the sweat gland areas it has out, you can now take off the skin and are left with just skunk meat to now cook and eat.

Step 6: Once you have done a good job making sure all things are out and are left with skunk meat, this can be cooked over a fire, stew or baked.

Whatever preference you have for eating meat, add some seasonings and your in business.

To be honest with the things ive read and seen, most people say it is comparative to having rabbit and has a similar color and flavor.

What are the dangers of eating skunk?

Some big things that need to be addressed off tops is the following:

A big deal as the skunks are carriers of this, so if you take that risk of eating thankfully according to CDC found here: Rabies virus becomes noninfectious when it dries out and when it is exposed to sunlight.

So unless you get bit by one or get its bacteria filled cavity sack in a cut or would its most likely not going to harm you thankfully.

This will occur when the sack of skunk meat has been broken open or possibly run over and gets into the skunk meat thus making it not edible due to the contaminates in it now.

Overall if you are willing to take the time out to not run over Peppy or if you want to see what Peppy tastes like, I hope the instructions above suffice that and get you to your goal.

Skunks we have seen on TV such Peppy Le Pew, are seen as funny and entertaining which they should be.

The ones found out in the wild are not cute cuddly or something to mess with. But if you are willing to play on the wild side and catch and eat skunk, hopefully its something good to eat and not bad.

Good luck and Be adventurous!!!!!