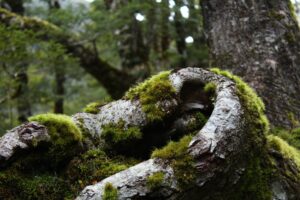 The question today is moss edible? Moss is a type of plant that grows in moist and shady areas.

It is often found in forests, on rocks, and the sides of trees. is a low-growing plant that does not have stems or leaves, but instead consists of tiny green threads that form a carpet-like layer over the ground.

Moss is an important part of the ecosystem and provides food and shelter for many animals. But is it edible for humans? And how nutritious can it be?

Is Moss edible? Can You Eat Moss?

The short answer is yes, moss is edible. However, it’s not necessarily something you should be eating regularly or in large quantities. Moss has a very low nutritional value and can contain toxins that can make you sick if ingested in large amounts.
Moss does have some nutritional value and may offer some health benefits when eaten. It contains vitamins A and C, as well as minerals such as calcium, magnesium, and iron. Eating moss may also help to reduce inflammation and improve digestion.
On the other hand, there are potential risks associated with eating moss such as the presence of toxins or parasites. Therefore, it is important to identify safe species of moss to eat before consuming it.

Consumption of Moss Throughout History:

Moss has been used as a food source throughout history by some cultures.

In parts of Scandinavia, moss was traditionally eaten as a soup or porridge. In Japan, moss was used to make a type of jelly called “Kanten”.

In some parts of South America, moss is still eaten as part of traditional dishes such as “Locro de gallina” (a stew made with chicken).

Moss was (and still is) also used to make tea or added to salads for flavor and texture. It has a mild flavor that some people find pleasant but others may find unappealing.

The texture can also be off-putting for some people; it’s slimy and slippery when wet and crunchy when dry.

How to Safely Eat and Consume Moss?

When it comes to eating moss, safety should always be your top priority.

To ensure that you are consuming moss safely, make sure to only eat moss that has been harvested from a clean and uncontaminated environment.

Additionally, it is important to thoroughly wash the moss before consuming it, as this will help remove any dirt or debris that may be present.

There are many species of moss, and only a number of them can be consumed safely.

That is why it is important to identify safe species of moss to eat first. Once you have identified your moss as safe, you can then clean and prepare it for consumption by washing and boiling it.

When it comes to identifying safe species of moss to eat, it is important to do your research.

Start by researching the different types of moss available in your area and their nutritional content. You should also look for information about any potential toxins or allergens in the moss.

Additionally, make sure that the moss you are considering has been harvested from a clean environment and is free from contaminants.

You can also consult with a qualified nutritionist or herbalist to ensure that you are selecting a safe species of moss for consumption.

Are There Health Benefits of Eating Moss?

There are some potential health benefits associated with consuming moss.

Adding a bit of moss to your meals could be a great way to get more vitamins and minerals into your diet and can increase your intake of dietary fiber or antioxidants.

Moss is rich in antioxidants, which can help protect your cells and reduce your risk of developing certain diseases.

Moss also contains vitamins A, C, and E, as well as minerals like calcium and magnesium. These nutrients help you keep your body healthy and function properly.

Moss is also high in dietary fiber, which can help keep you feeling full for longer periods of time and aid in digestion.

Some moss may also have anti-inflammatory properties that could help reduce inflammation throughout the body.

Despise the fact that most people view moss as a healthy and natural meal, it does come with some potential risks. Here are some of them:

Moss can easily become contaminated with bacteria, fungi, and other microorganisms due to its damp environment. Eating contaminated moss can lead to food poisoning or other illnesses.

Some people may be allergic to moss or the substances it contains. Eating moss can cause an allergic reaction such as hives, itching, swelling, or difficulty breathing.

Moss may contain toxins that can be harmful if ingested. These toxins can cause nausea, vomiting, abdominal pain, and even death in extreme cases.

Moss does not contain any significant amounts of essential nutrients such as proteins or vitamins and minerals that are necessary for good health like peanut butter.

Eating moss could lead to nutritional deficiencies over time if it is consumed regularly as a food source instead of other nutrient-rich foods like fruits and vegetables.

If you do decide to eat moss, it’s best to start with small amounts at first to see how your body reacts before consuming larger quantities.

Eating too much moss can lead to digestive issues such as nausea, vomiting, diarrhea, and stomach cramps due to its high fiber content and potential toxins present in the plant matter itself.

How Can You Eat Moss?

There are several different ways to cook and eat moss including adding it to salads or soups or using it as a garnish for dishes like fish or vegetables.

Additionally, many recipes are available online for cooking with moss such as omelets with wild greens or pancakes with reindeer lichen (a type of edible moss).

Overall, while moss is edible in small amounts, it’s not something most people would want to eat regularly due to its low nutritional value and potential health risks associated with consuming large quantities of it.

If you do decide to give it a try though, make sure you harvest from an uncontaminated area and wash thoroughly before eating!