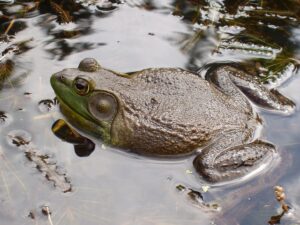 A frog gigger is a long pole that has prongs at the end used to catch frogs. It’s a simple hunting tool that allows you to spike and grab hold of the frog easily at them at a distance.

It has a multi-pronged fork which is sharp to make sure that it can pierce through the skin of the frog when used in a forceful manner. A gigger generally has a long handle so that the user can stand upright or close to upright while still having enough power and pressure to ‘catch’ the frog.

The longer handle makes it easier for users to hold the fork and to move around as well. Because you don’t have to be bent forward much in order to apply the fork where it needs to be (on the ground) it’s easier to walk and get to areas where frogs are more likely to be.

This type of process involves ‘hunting’ for the frogs by moving through areas where they generally are, including near bodies of water so it’s important to be able to stand and walk in a way that is comfortable and safe around these bodies of water.

How Do You Use a Frog Gigger?

If you’re looking to go ‘gigging’ then that starts with having a frog gigger (which we’ll talk about in a moment). You’re also going to need a bucket to put the frogs in and tools to gut them as well.

Gigging is pretty easy. To use your frog gigger grasp the handle firmly in both hands. Aim the sharp prongs toward the frog that you are trying to catch and quickly and firmly stab the gigger downward with the prongs aimed directly into the center mass of the frog. This will give you the best chance at hitting the frog.

If you graze the side of the frog, it’s likely to flee. On the other hand, if you actually get the center prong through the center of the frog, you’re going to have a much better chance of killing it quickly as well. This should definitely be a goal of frog gigging, to kill the frog as quickly as possible so as to avoid suffering. Not to mention you are looking to get a good meal and a frog that isn’t killed quickly will continue to move and attempt to get away, which will cause even more damage to the frog itself.

You will likely want to practice the process of thrusting the frog gigger to make sure you have the right pressure and the right length to your tool. The more you practice before you actually go out and try to catch frogs the better prepared you will be and likely the more successful you will be as well. Trying it out on apples is a great way to train your aim.

What Tools Do I Need for Frog Gigging?

There are actually very few tools that you’re going to need for frog gigging. The main one is the ‘gig’ or the multi-pronged tool that is used to stab through the frog. This ‘gig’ generally has somewhere between five and eight points on it to make sure you have the best possible chance of getting the frog the first time. And these prongs could be a range of different sizes. Some gigs have long prongs and some might have shorter ones, but you want them to be long enough to easily achieve your goal.

The pole of the frog gigger is typically around five feet to seven feet long to give you enough power and enough distance from the frog as well. But the exact length that you’re looking for will generally depend on your height as well as the distance away from the frog that you are supposed to be in order to catch it without scaring it first.

You may also want to have a net available so that you can scoop up the frog after you catch it or so you can use it as another option to catch the frogs. The net should also have a pole that is approximately five feet to seven feet in length so you can easily reach out with it and catch a frog without having to get too close or having to bend down too far to get it off the ground.

A bag is another important piece because you need somewhere that you can store the frogs once you’ve caught them. A bucket may also be an option but make sure that you have something available so the frogs are kept in one place and you don’t have to worry about carrying them yourself. A bag or bucket will allow you to keep the frogs in a clean cool place altogether.

A flashlight or headlamp is another important part of the tool kit because you will be hunting for those frogs at night. You’ll need a way to see what you’re doing and to locate the frogs. You also need to have a way of stopping the frog from ‘running away when you’re trying to catch them and the light takes care of that for you.

Finally, many people who go frog gigging like to have a boat to do it. This isn’t required and you can absolutely go without a boat and still get plenty of frogs as well.

Once you catch your frogs, you’ll probably put them into a bag to start. But then you’ll need to go through the process of cleaning the frogs, and that starts with cutting the frog legs away from the rest of the body.

You want to cut the legs of the frog above the hip. If you do this properly then both legs should stay together and you should be able to take care of them more easily. This also ensures that you’ll get the most meat from the frog legs because you’re getting the upper portion and the lower.

You also have the opportunity to remove the feet at this stage though it’s not required and you could also eat the feet.

If you’re just getting started you might not know everything you need in order to gig frogs. That’s where you may need a few additional tips to get you started. So, let’s take a look at what you need to know.

What Else Can I Do With My Gigging Pole?

In general, there are only two things that you can do with your gigging pole. The first is to gig frogs. If you’re creating or buying a frog gigging pole that’s what it’s designed for, after all. So, you want to make sure that you are getting something that will serve that purpose well.

On the other hand, you can also use your gigging pole for fish gigging. This is where you would do the exact same thing as you do with frogs, except you would be doing it with fish instead. It can be quite difficult to go fish-gigging, but it can be a lot of fun for some people as well.

If you have enough patience to learn and you can develop enough skill, you’re definitely going to be happy with the experience and you’ll likely have a whole lot of fun with your family or friends (whoever you decide to go with).

When it comes down to it, frog gigging is an event that’s going to take some skill, but it’s also going to be fun and it’s going to get you some really fresh frogs’ legs. In the right climate frogs are abundant and can be a great food source when you need them. Gigging is also simple, cheap, and requires much less skill than other types of hunting making it an easily accessible way of foraging for your own food when you need to.

8 thoughts on “What is a Frog Gigger? All You Need to Know About Catching Frogs”